Tucked in the arch of the boot, Basilicata straddles the coast of the Ionian Sea between Calabria and Puglia. To the west lies Campania and a little stretch of the Tyrrhenian Sea to the southwest. It is a mountainous region of the southern Appennines, known as Appennino Lucano, with peaks reaching over 6500 ft. It’s a little known region, both in the wine world and for tourism, producing only about 0.2% of Italy’s output, from 5000 acres of vineyards. Like Tuscany, it is a region dominated by the production of red wine, with Aglianico and Sangiovese accounting for about 60% of the wines made here. 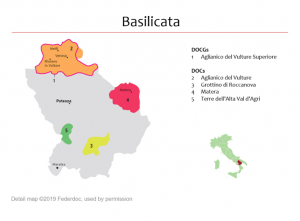 Greek settlers arrived here in the 8th century BC, to a place they considered “Oenitria” or land of vines, in which wild vines grew profusely and added their own varieties. Inhabited by the native Lucani tribe, the area roughly corresponded to modern day Basilicata on up to the Cilento in Campania. Even today, Lucania is still used as a synonym for the region. In the 3rd century BC, Lucania was annexed by the Romans, who continued the further cultivation of vines. It was mentioned by both Horace and Pliny the Elder for the quality of its wines. After the fall of the Roman Empire, it became a part of the Byzantine Empire, when it was renamed “Basilicata”. In the 11th century, the Normans conquered it and Basilicata became part of the Kingdom of Sicily. There is not much found in the historical record of the wines later, however in the 15th century, it’s known vineyards covered the slopes of Monte Vulture around Barile, Melfi and Rapolla. 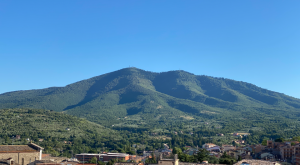 The northern part of the region is dominated by an extinct volcano, Monte Vulture. First erupting around one million years ago – with the last eruption over 40,000 years ago – the volcano defines the area, both from a geographical and geological standpoint. In this area, the dark soils are comprised of lava, tuff, porphyry and pyroclastic materials, all evidence of explosive volcanic activity. Moving towards the center of the region, the soils become clay and to the east, there is the continuation of the karst plateau of Puglia, made of limestone. Monte Vulture, however, is the most significant wine producing area of Basilicata, home to the Aglianico del Vulture Superiore DOCG.  Grown on volcanic soils, at higher elevations between 1450 – 1950 feet above sea level, the center of production remains around the same area as the towns of the 15th century. These are long-lived wines of high quality, and rank among the top red wines in Italy, although largely undiscovered by international markets. 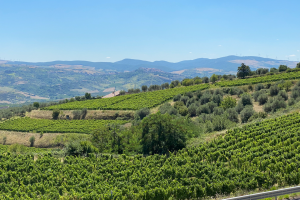 The climate is semi-continental inland in the mountains, with hot summers and cold winters in which snow is not unusual, even this far south. The grapes are harvested late, into the end of October so have a long ripening season which is so important for Aglianico. Towards the plains on the Ionian, the climate becomes more Mediterranean, so we see the influence of two major factors here – the sea and the mountains.

Aglianico accounts for about 50% of the wine production and Sangiovese is used for blends in two of the DOC wines. Malvasia Nera di Basilicata is a minor red grape and can also be used in the blends. The white grapes are Malvasia Bianca di Basilicata, Italica and Moscato Bianco, used in blends in Matera and Grottino di Roccanova IGT white wines. Malvasia is being used on its own to make dry, sweet and sparkling wines.

While Aglianico grown on Vulture was thought to be different from that grown in Campania, recent research has shown it to be a different biotype of the same grape. It is a grape that prefers hillsides and high elevation and performs best on volcanic soils, so Vulture is a perfect home. High in tannins and acidity and ruby red in color, Aglianico is sometimes referred to as the “Barolo of the South”. On the nose, there’s red cherry, plum, wild red berries, and licorice. With age, notes of spices, tar, leather and smoke arrive as the wine develops complexity. Aglianico del Vulture DOC must be held until the year after the harvest while the Superiore DOCG version requires mandatory ageing of two years, one year in wood and one in the bottle. For the Riserva wines, three years is required, two in wood and one in the bottle, before release. Once in your cellar, these wines always benefit from additional bottle age 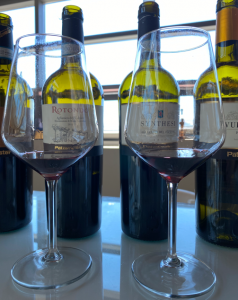 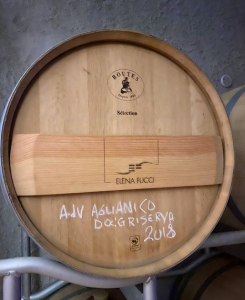 Basilicata is an area for sheep farming and the cuisine is robust with lamb and pecorino cheeses featuring prominently, along with pork, salamis, game and hearty pasta dishes. The full-bodied red wines compliment the food from the region.

In the minor appellations, there’s the Matera DOC, near Puglia and facing the Ionian Sea. They produce a white from Malvasia and also one from Fiano. Reds in this DOC are made with Sangiovese, Primitivo and a blend of Cabernet Sauvignon, Primitivo and Merlot. Rose, passito and sparkling wines are permitted by the regulations.

A blend of Merlot and Cabernet Sauvignon is found in the Terre dell’Alta Val d’Agri DOC. Here are dishes made with the unique local horseradish, like pasta and an omelet called rafanata.

Producers worth seeking out are Basilisco, Elena Fucci, Paternoster, D’Angelo, Re Manfredi and Michele LaLuce. The town of Melfi makes a nice base to tour the area and there are some ancient cellars to see, carved into the rock below the town. 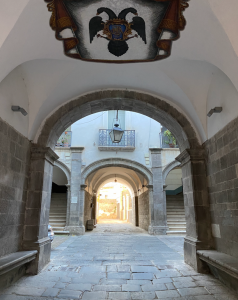 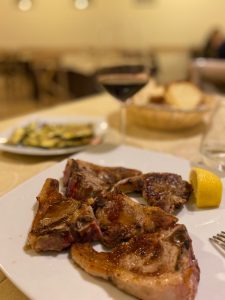 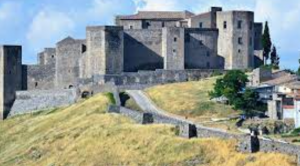