Head northeast from Venice towards the border with Slovenia to arrive in Friuli Venezia Giulia, Italy’s most eastern province.

Overlooking the Adriatic Sea in the south and stretching to the Carnic  Alps on the border with Austria, Friuli follows the coast until the city of Trieste, its capitol. Once part of the Austria-Hungary empire, it was ceded to Italy in 1918. As a crossroads of European struggles, the region has seen the Celts from Gaul, Julius and Augustus Caesar, Attila the Hun, Charlemagne, the Serenissima, the Inquisition, Napoleon Bonaparte, and Adolph Hitler. Not to mention the dinosaurs  and cave bears – all in all, quite a storied past! In wine, as in the culture of the area, FVG is the hinge between the Mediterranean world and that of continental Europe. 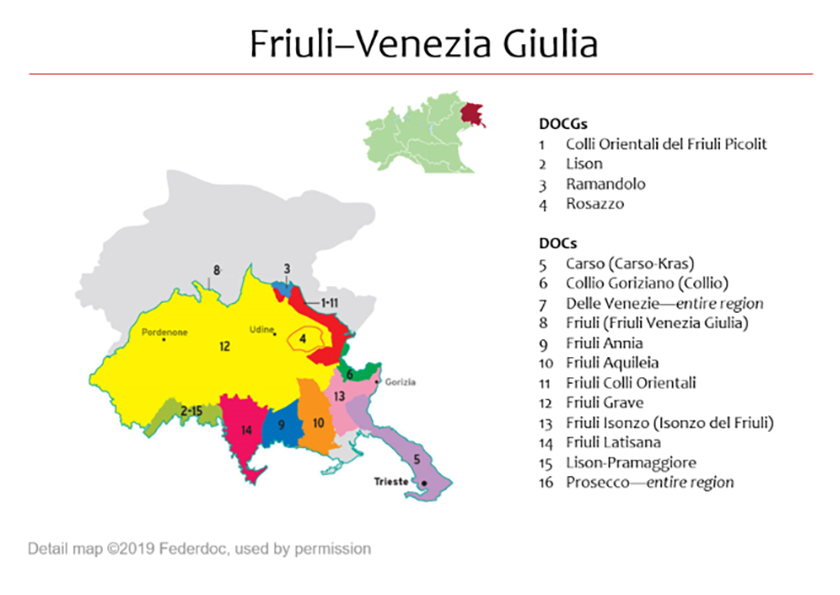 Although inhabited for the last 14,000 years, it was largely settled by the Celtic tribes of Carnic Gaul in 400 BC. The Romans arrived in 181 BC to stage their takeover and founded the colony of Aquileia. A century later, in 53 BC, Julius Caesar established the Forum Julii, now the city of Cividale, and gave his legionaries land for farming. On the sunny hills of the Colli Orientali, they turned to viticulture. Later on under Augustus, Aquileia became the capital of the X Regio Venetia et Histria, from which they would rule the region for centuries. The famous Roman wine, Pucinum, came from the vineyards of this town. It became the 4th largest city in the Empire and the major point for all trade to the north.From the forums, to villas to colosseums, the Roman presence can be found all over the region.

During the Middle Ages, as in many areas of Europe, the cultivation of the vine was continued by the monasteries. The Benedictines and in particular, the Abbey of Rosazzo took a leading role in making wine and olive oil the leading crops. The Venetian Empire consumed and exported the wines during their domination beginning in 1420. They also deforested much of the western area for their shipbuilding and exploited the farmers to pay for their wars in the 1700s.

In 1797, the Austrians gained control with the treaty of Campoformido. Trieste, as the only port city in the empire, prospered and it became a vacation destination for the wealthy. The demand for the quality local wines of Friuli increased dramatically and wines were exported over northern Europe. Phylloxera and the world wars of the 20th century decimated the area and it was not until the 1960’s that Friulan wine started to come into its own again. 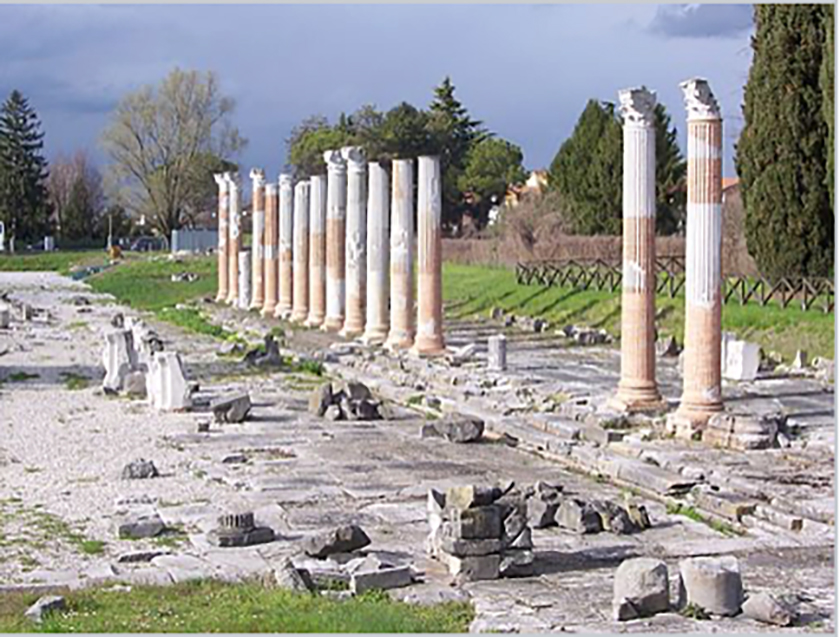 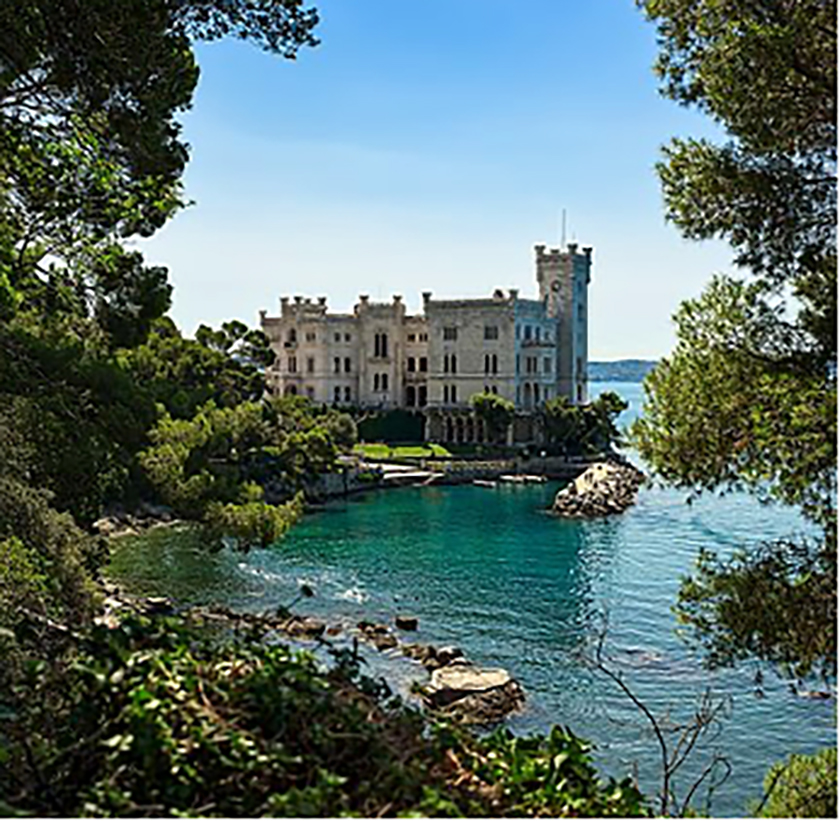 Castle of Miramare in Trieste. Photo by Wikipedia

The region spans a wide variety of climates and landscapes. The north has mountainous terrain, pristine pine forests and mountain lakes with an Alpine continental weather. The central plains, in which a majority of the agriculture is found, balance the warm and humid maritime breezes with the cool and dry tramontana wine from the Alps.The rolling hills in the east have a mild and temperate climate and the entire region has significant rainfall throughout the year. 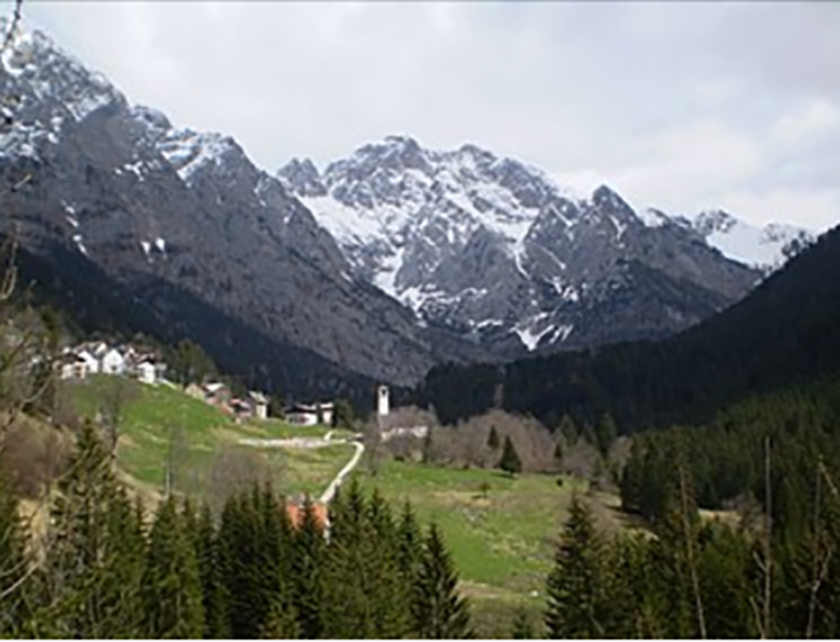 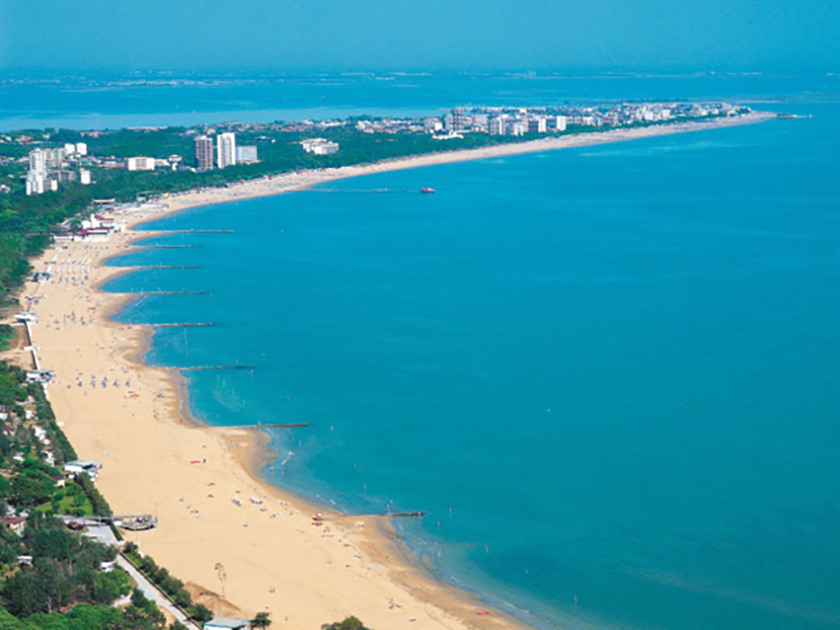 There are three major soil types that correlate to specific areas within FVG. In the central and coastal plains, there are alluvial soils – sand, gravel and clay – left by flooding rivers and retreating glaciers. In the eastern hills, most suitable for quality winegrowing, are soils formed 33 to 55 million years ago when this area was covered by the inland sea. These alternating layers of calcareous marl and sandstone are known as ponca soils or Flysch of Cormons. In the far southeastern corner, the Carso runs between Slovenia and the Adriatic Sea. It’s a  narrow strip of limestone plateau cover by a thin layer of iron-rich sand and clay. 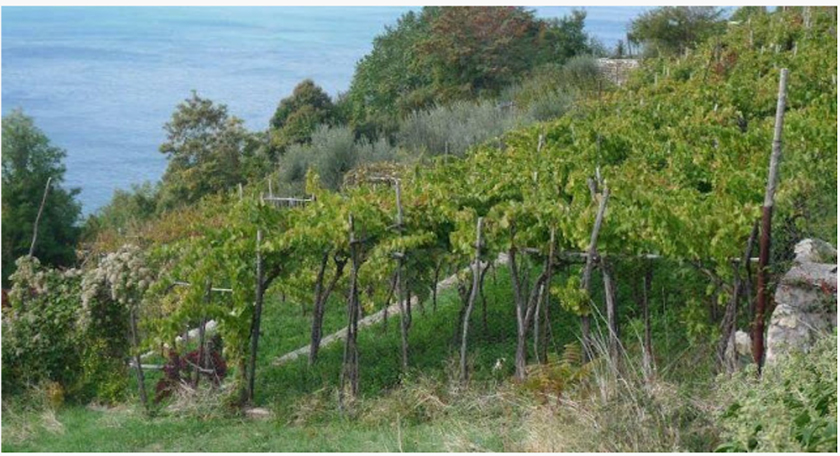 Vineyards in the Carso. Photo courtesy of From Italy With Wine

Friuli grows a very wide range of grape varieties. Both indigenous and international grapes are found here and about 75% of production is white. The whites vary from pale, dry and austere to rich golden yellow, barrel-aged, structured and more full-bodied. Many of the international varieties were introduced in the 1800’s while the German varieties date back to the 15th century. Several varieties are considered native to both Friuli and Slovenia. Pinot Grigio is the top planted wine, with over 20% of production, followed by Friulano, then Chardonnay and Sauvignon and Pinot Bianco.  Beginning with the White Wine Revolution in the late 1960’s, several winegrowers from the Colli Orientali set the standards for modern white winemaking for Italy. With greater attention to vineyard and cellar practices, the technological approach paid off and Friuli has some of the most advanced wineries in Italy – and a reputation to match. Today some of the most complex and structured white wines in the country are made here, with longer ageing potential. Using native grapes like Friulano, Ribolla Gialla, Verduzzo, Malvasia Istriana and Picolit, along with Riesling and the international varieties, FVG has raised the bar of quality. New concepts of orange wine and amphorae ageing have been adopted by pioneering producers.

While smaller in quantity, the red varieties of Friuli are no slouches. Refosco dal Peduncolo Rosso and Schippettino are the native varieties, along with Tazzelenghe, Terrano, and Pignolo. (Almost extinct, Pignolo was found growing in a few rows against a single wall at the Abbey of Rosazzo in the 1970’s. Cuttings were taken and used to begin to replant this interesting grape again.) The Bordeaux varieties of Cabernet Franc, Cabernet Sauvignon and Merlot are widely planted. Most of the Friuli Grave DOC on the center plains are cultivated with red grapes. In the summer, these reds are often served chilled from the refrigerator. 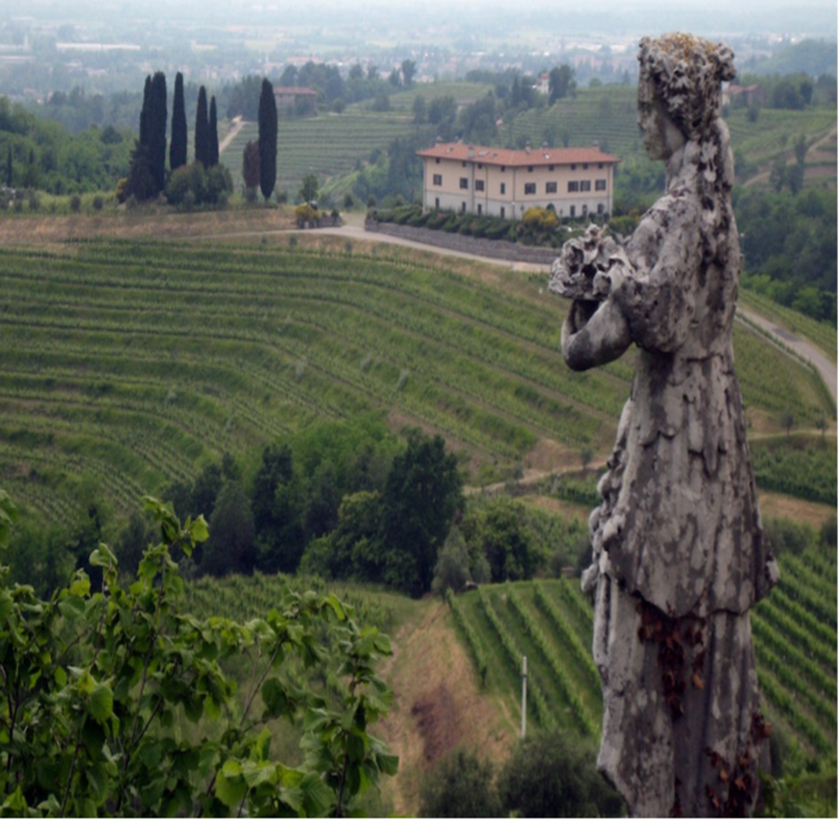 From a bulk wine zone in the 1960’s, FVG has grown to be a high quality wine region. Over 40% of its wines have DOC (Denominazione di Origine Controllata) designations, and most of the appellation names are preceded by “Friuli” to increase regional identity and consumer awareness. In total, the region has 10 DOCs and 4 DOCGs.

One of the DOCG denominations Rosazzo, a small growing area around the 10th Century Abbazzia di Rosazzo. The wine is a white blend of Friulano, with Sauvignon, Pinot Bianco, Chardonnay and Ribolla Gialla. Two of the others are Colli Orientali del Friuli Picolit and Ramandolo. Picolit is one of the most famous sweet wines in Italy. Cultivated during Roman times as a legendary wine, it also was almost extinct and saved by the Perusini family at the beginning of the 20th century. Picolit is a wine made in the appassimento style, with dried grapes, and shows complex aromas of honey, white flowers citrus, dried fruits, apric and vanilla. It should be considered really as a Vino da Meditazione, to enjoy alone after dinner. 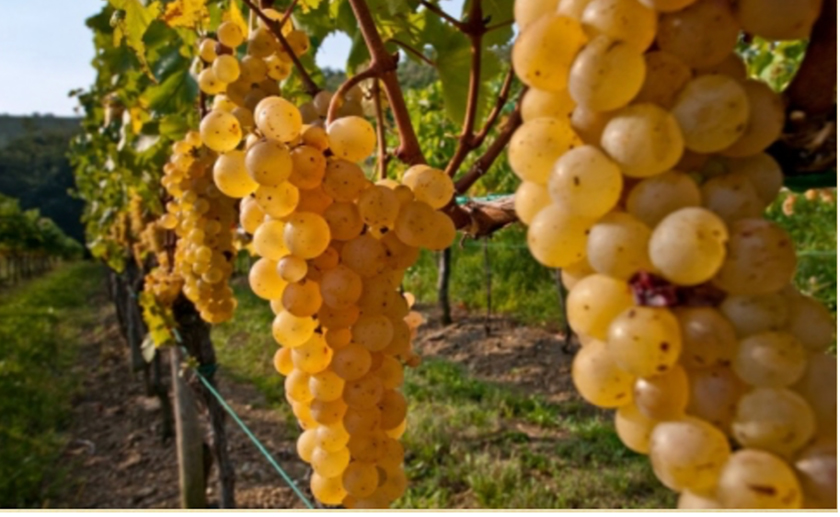 Ramandolo is made from 100% Verduzzo Giallo grapes and has been in production since the Middle Ages. It is a late harvest wine, also made in the appassimento style with some raisinated grapes to intensify the flavors. There’s floral aromas of acacia and linden, honey, tropical fruits, apricots and almonds.

Another ancient Roman town that was famous for its wines is Lison. The Lison DOCG mostly lies in the Veneto, but in Friuli, the zone of production is within Pordenone. It is known for a crisp and mineral white wine based on Friulano, with aromas of white flowers, wisteria and green apples, lime.

The vines of the Carso are grown in steep terraces called pastini, from 650-1600 ft above sea level. Located in the provinces of Gorizia and Trieste, it is strongly influenced by a mix of Italian and Slovenian cultures. The wines have a distinctive mineral and salt character and are frequently made from Vitovska, a white variety, and Terrano, a red one. Malvasia Istriana and Refosco are also found here.

The Isonzo River flows from its headwaters in Slovenia to the Adriatic. In the Isonzo del Friuli DOC, its pebbly gravel soils in the river valley are reminiscent of the Medoc in Bordeaux. The cooler northern right bank of the river is planted to white grapes while the warmer southern left bank has more red varieties, such as Refosco, Merlot and both Cabernets. The cool dry Bora wind descending from the Balkans alternates with the warm air off the Adriatic. The winds create an meso-climate which is ideal for growing grapes – plenty of sunshine, good ventilation and a wide diurnal temperature variation.

Besides its home in the Veneto, Prosecco from the Glera grape is found in an inter-regional DOC in Friuli.  It can be made in the provinces of Udine, Gorizia, Trieste and Pordenone.

Fruili Colli Oriental DOC is considered to be one of the finest growing areas in the region. The city of Cividale is the center and the area has had a prominent reputation for centuries. The most planted white variety is Friulano, although single varietals in every grape are found here. For the reds, Refosco and Schippettino stand out in this zone.

For most of us, the cuisine in FVG is not what comes to mind when we think of ‘Italian’ food as there’s a strong influence here from Austria, Hungary, Slovenia and Croatia. Considering the variety of cultures that have passed through the region throughout history, it’s not surprising that each has left its imprint. There’s an interesting mix of dishes – from apple strudel, to goulash, polenta, gnocchi stuffed with plums or cherry, sauerkraut, many pork dishes and lots of potatoes. Along the coast, the food is more similar to the seafood based cuisine of Venice.

The Prosciutto of San Daniele rivals that of Parma and has been made here for over 500 years. Tergeste olive oil is considered among the top 10 in Italy and the olive trees have been growing in Trieste for 2000 years, since the Romans planted them. The Alpine cow’s milk cheese of Montasio is well known all over Italy. First made by monks in the 13th century, it can be found in fresh and aged forms. There’s a famous Frulan snack known as frico, fried slices of the aged cheese. Fresh salami called salamini italiani alla cacciatore pair well with the red wines of the region, and were first made in the 16th century for hunters and soldiers to provide long-lasting rations.

Brovada is made in the same way as sauerkraut, but turnips are used in lieu of cabbage. It is traditionally served with musetto, a large thick pork sausage. Gubana is a bread made with dried fruit, nuts and cinnamon – locals insist you must try it with the local grappa! 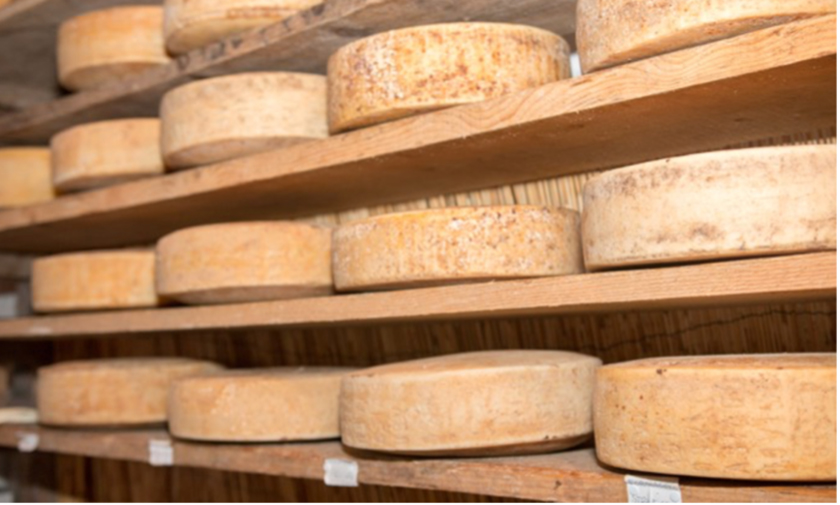 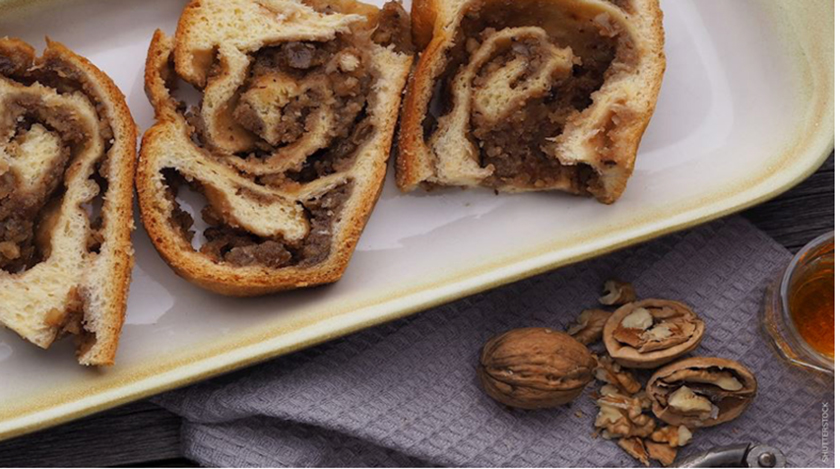