Italy curves along the northwest coast towards France  where Italian Riviera faces the Ligurian Sea and up to the border with Piemonte. Genoa, the capitol, was one of the powerhouse city states of the Middle Ages, along with Venice, mobilizing its commercial and military prowess to dominate the Mediterranean. The country’s 3rd smallest region, it’s known today for Portofino, the exclusive picturesque port of the Riviera and the Cinque Terre, five small villages perched on a steep rocky coast and now a UNESCO heritage site. The delicate olive oil, basil and pesto are all a watchword for quality throughout Italy. 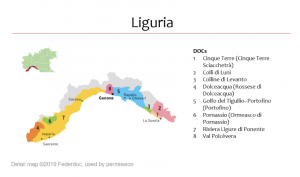 Settled by the Liguri before 1000 BC, the tribe planted grapes on the steep slopes bordering the sea long before the arrival of the Etruscans and the Greeks. The wines they made here were sought after during the Roman times, especially those of the town of Luni, noted by Pliny the Elder. The Middle Ages saw the rise of the Maritime Republic of Genoa and the wine trade became a major source of revenue for La Superba by the 14th century. The trade was so important that the Republic created an office to protect and support it. Vineyards were 65% of the farmland and wine was thought important at home to protect the citizens against unsafe drinking water, epidemics and all sorts of diseases. After the 17th century, as Genoa’s influence began to wane, viticulture lost ground to the planting of olive trees. Between internal instability and the competition of British and Dutch trade, it became ripe pickings for Napoleon in the 19th century. At the close of the Napoleonic Wars, the region was gifted to the Kingdom of Sardegna, and became part of Italy when the country united as the Kingdom of Italy in 1861. Many of the vineyards were abandoned at the end of the 19th century after the phylloxera devastated the vineyards – the steep and terraced terrain was not profitable to maintain. As tourism returned after the depression and the wars, the wine industry began to grow again in the 1960s and 70s. As the second smallest region in the country, the wines are not known extensively outside of Italy but greatly appreciated by those who visit the region.

The rocky coastline, formed by the Maritime Alps and the Ligurian Apennines, appears to rise out of the sea. There is no flat land for the vines and viticulture here is heroic to say the least. Between the steepness of the slopes, the need for building of dry stone retaining walls and labor intensive practices to cultivate and harvest the grapes, this Is no place for those not totally dedicated to making wine.

The soils are stony and poor, with two distinct types depending on the location. In the eastern part, the Riviera di Levante, there’s a mixture of clay, sand and limestone. While to the west, the Riviera di Ponente, has red marl soils, a sedimentary rock of clay and limestone. The region is protected by the mountains from the cold winds arriving from the north, which keeps the climate moderate. The sea provides both humidity and breezes, creating a Mediterranean climate with some colder continental influences in the mountainous areas further inland. Rainfall is abundant, especially with winds blowing from the south towards the Riviera di Levante. In contrast, on the western side, the Riviera di Ponente receives less than half the rainfall of its counterpart in the east. Autumn and winter are the wettest parts of the year 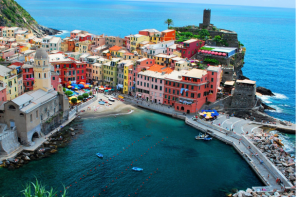 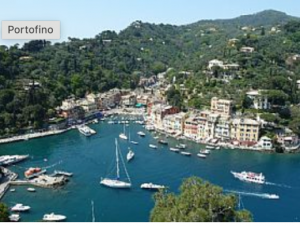 Most of the 100 different grape varieties found here are indigenous to Liguria. It’s thanks to the extensive viticulture practices of the Republic of Genoa that this historical legacy still remains. As Venice was famous for Malvasia, and carried it throughout the Mediterranean, the star of the show for Genoa was Vermentino. Through the trade of the Republic, it can be found in Sardegna, Corsica, Tuscany, Piedmont (known as Favorita), southern France (known as Rolle) and Spain. Today in Liguria, over 20% of the vineyard plantings are dedicated to this white grape known as the ‘wine from the sea’. It’s affinity for growing areas near the coast and its matchless pairing with seafood make it deserving of its reputation. With a bouquet of citrus, herbs and white flowers, there is a pronounced minerality and sapidity from its home always near the sea 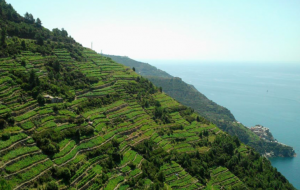 Over 70% of the wine produced in Liguria is white. Another white variety is Pigato, found on the western Riviera di Ponente. Recently, studies have found that the two grapes are genetically identical. They produce wines that are unique from one another, due to their adaptation to different terroirs in Liguria, with variances in soil and climate. While Pigato has notes of stone fruits and honey, the herbal hints and the sapidity in the wine are shared characteristics.

The Bosco grape is from La Spezia and used as part of the white blend of the Cinque Terre DOC. It is important in the famous sweet wine, Sciacchetra, made in the appassimento style from dried grapes. Sciacchetra is only produced in very small quantities, not easy to find and is quite pricey but definitely worth seeking out for fans of dessert wines.

Albarola is grown in the Riviera di Levante and frequently used as a blend with Vermentino and Bosco. It’s also known as Bianchetta Genovese in some DOCs. Citrus and white flowers are the keynote, along with the refreshing acidity typical of the whites in Liguria.

Though over 70% of the wine produced in Liguria is white, there are three red grape varieties that make up the remainder. Rossese is the most planted variety, considered as traditional to the Riviera di Ponente and has 10% of the vine total. It is most well known as Rossese di Dolceacqua, for the small medieval town in which it is found along the French border. No surprise that Tibouren, a French variety, was found to be genetically identical, although it is not known where the grape might have originated. The wines are medium in body and pale in color, with herbal notes and aromas of red berries and spices.

Ormeasco is the local name for the Dolcetto grape and found in the Riviera di Ponente. Compared to those of Piedmont, these wines tend to be lighter in body and have more herbal notes. Intense in color with an aroma of violets and blackberries, it can be made in sweet and dry styles. Closer to the border to Tuscany in the south of the region, Sangiovese is common, especially in the Colli di Luni and Colline di Levanto DOCs. Red blends are made with Ciliegiolo, Canaiolo and Sangiovese. If Tuscan wines are favored, these wines are worth a look too.

On the Gulf of Tigullio, near Portofino and Santa Margherita Ligure, the red variety Ciliegiolo can be found as a ‘novello’ or sparkling, meant to be consumed within a year of harvest. It’s perfect with fish appetizers, grilled octopus and pesto dishes. White Moscato del Tigullio is a sweet wine with aromas of lemon and orange, served cold and drunk young with biscotti or sweet breads like Pandolce.

In addition to differing grape varieties, there are diverse training methods in the two Rivieras. The western Ponente, the traditional method is Alberello – like small trees. In the eastern Levante, especially in the Cinque Terre, the Pergola – a type of canopy. Vertical training systems are becoming more common though, as the Pergola in particular is quite labor- intensive. 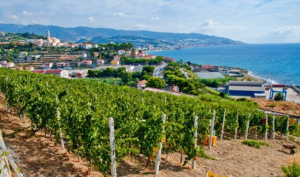 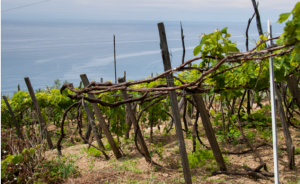 For the most part, Ligurian wines are meant to be drunk young and fresh, although some Rossese and red blends from the hills of the Tuscan border can improve with age. Let’s turn to the perfect food pairings with the wines of this region. It goes without saying that the cuisine revolves around the sea so first on the list must be Burrida,the fish stew of Liguria. In Italy, the mandatory inclusion is the spiny Rascasse or scorpion fish – ugly but tasty. But for those not familiar with species of the Mediterranean, here’s an adapted recipe. Pair with Vermentino or Pigato, or with sparkling Ciliegiolo. Fritto Misto di Pesce can be paired the same or with the white blend of the Cinque Terre. 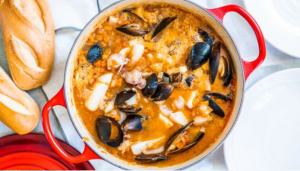 Rossesse is substantial enough for grilled meats, game, hearty vegetable dishes and mushrooms, as well as medium-aged cheeses. Try Ormeasco with a pesto-based lasagna or a slice of farinata, fresh out of the oven –  a savory pancake of ceci flour (garbanzo beans). 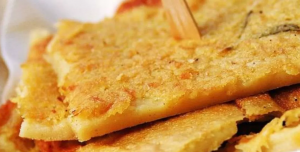 Famous all over Italy, the pesto of Liguria comes from a unique variety of basil, which grows contentedly in the sea breezes of the region. Picked very young, it becomes the signature dish of the region with pine nuts, salt, olive oil and cheese from Parma or Sardegna. Typically served with a local pasta called trofie, one sometimes finds potatoes and string beans added in. Over grilled swordfish, stirred into soups, made into green lasagna, spooned over gnocchi with calamari or ravioli, there’s not much it doesn’t go with! Best paired with Vermentino, Pigato or whites from Cinque Terre, Colli di Luni or Tigullio. 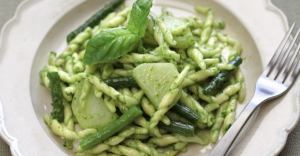 In Liguria, olive groves outnumber the vineyards by about 5 to 1, as it’s become a much more profitable business than the vine.  The Taggiasca olives are small, sweet and nutty and are fantastic with a glass of white Ligurian wine. The oil from the region is light and delicate , mostly grown in the area to the west around Imperia. It’s preferred for dipping vegetables or to use with seafood.