No other region in Italy has had more impact on the imagination of film-goers and readers around the world, and in particular, the Americans. The evocative medieval hill towns, Renaissance artwork, the winding strade bianche lined with cypress trees, lazy lunches on terraces overlooking the vineyards, every curve of the road with a postcard view. Add in the food and the wine and Tuscany has certainly fueled many a retirement and vacation wish list. 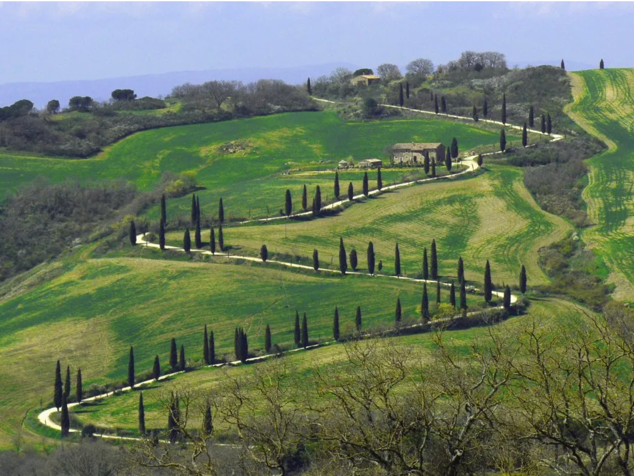 Here is one of Italy’s powerhouse wine regions, both in production and the number of DOC (41) and DOCG (11) designations, ranking 2nd behind Piemonte. The brand recognition though, beginning in the 14th century, is perhaps the strongest in Italy. Fifty years ago, Chianti was basically synonymous with Italian wine and today Tuscany is known for Sangiovese, a red wine of high acidity and tannins, perfect not only for ageing but for the rustic and hearty cuisine of its countryside. Over 87% of the production is red grapes, the highest of any region in Italy and 31 of the 41 DOCs are based on Sangiovese.

Situated in the northwestern center of Italy, the city of Florence is the cultural heart. To the west are the Tyrrhenian and Ligurian seas; bordering the coast, the gently rolling hills and plains of the Maremma and Bolghieri. To the east are the Apennine Mountains, the highest elevations, and Monte Amiata, the extinct volcano, lies to the south. While not thought of as a maritime province, there are almost 400 miles of coast line. 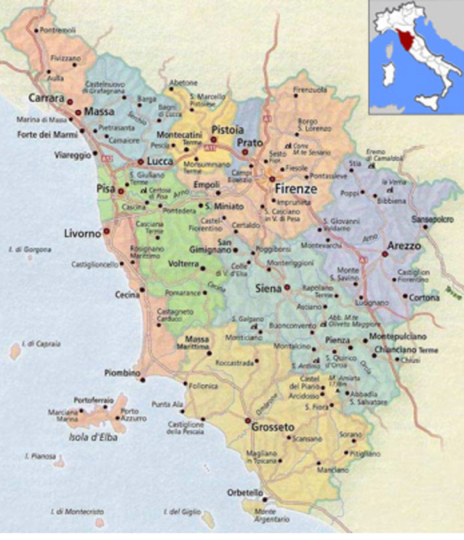 Entire books have been written on the history of Tuscany, but as it relates to wine, there are several main points. The Etruscans settled here in the 9th century BC and remained the dominant power. Tuscany was their center, especially the southern part. In fact, the name derives from Etruria, used by the Romans to designate the land inhabited by the Etruscans. Not only did wine infuse every aspect of their social and cultural life, but they had quite an advanced knowledge of viticulture and the making of wine, using the wild vines of the area. After the defeat of the Etruscans by the Romans in the 3rd century BC, the cultivation of the vine continued but the Romans did not attach the importance of Tuscan wines to those of Campania, Sicily and Lazio.

During the Middle Ages, the Via Francigena, the road from northern Europe to Rome, passed through Tuscany and contributed to the growth of winemaking here by the important trade with pilgrims and travelers. The prominent noble families of Antinori, Ricasoli and Frescolbaldi started in the wine trade as early as the 12th–14th century and are among the oldest in the world still operating today.

From the late 13th century to the 16th century, Florence was the epicenter of the Rinascimento, the Renaissance, the cultural awakening which created some of the greatest art, literature and architecture ever known to the Western world. Starting with Lorenzo de’ Medici, the family brought renown to Tuscan wines and in 1716, Cosimo de’ Medici issued a Bando, an edict which established the limits of and protection for the wines of four prestigious viticultural areas in Chianti, the first one ever of its kind. The forty-two miles from Florence to Siena, today’s SR 222, was the Chiantigiana, the road through the most renowned vineyard areas, then and now. 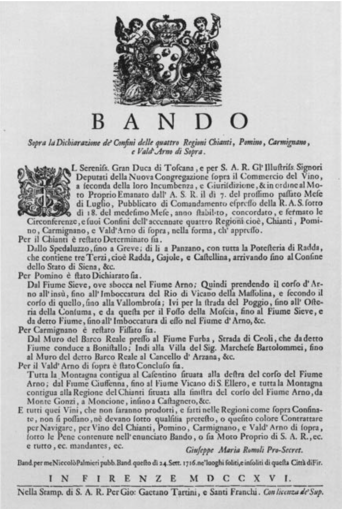 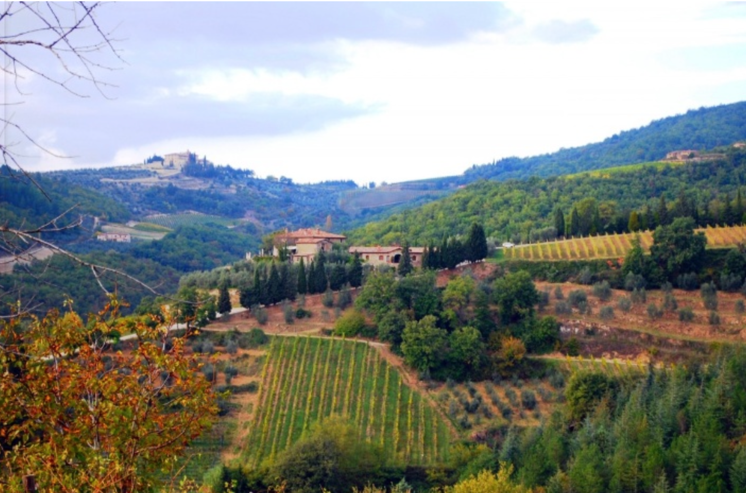 Along the Chiantigiana wine road –          Photo by Renzo Ferrante

After the end of the mezzadria, the sharecropping system in Italy outlawed in 1966, the quality of Tuscan wines started its climb on the world stage. The importance of quantity under the coltura promiscua tradition (mixed crops growing with or under the grape vines) was supplanted by improvements in quality by designated vineyards and investment in winemaking facilities, along with the establishment of the DOC production rules. Consider that Montalcino, the poorest town in Tuscany in the 1950s, without electricity or running water in most farm homes, went to one of the richest in two generations – an acre of land can bring a million dollars and bottles sell over $150. Chianti moved from an impoverished backwater to five star hotels and rock stars with multimillion dollar wine estates.

There are diverse and complex elements to the geology, the geography and in particular, the climate. Ranging from continental in the mountains and higher elevations, with snow in the winters, to the mild Mediterranean climate of Grosseto, the Maremma and the islands. Tuscany really sets the divide between the continental climate of Northern Italy and the Mediterranean climate of the South. The Ligurian and Tyrrhenian seas and the Apennine mountains create the microclimates determined by altitude, distance from the sea and the rain shadows that govern the wind patterns, the temperatures and rainfall. The south and the coast are the warmest parts of the region but benefit from sea breezes in the summer months. These areas tend to have the least diurnal temperature swings between night and day, which lessens the acidity levels and the aromatic complexity of the grapes. In the higher inland elevations, there can be a 30-40 degree swing in a day at the height of the summer months creating more complexity and with increased acidity, the greater ability to age.

While there are some more minor varieties for red grapes, over 62% of the production is Sangiovese, the most planted red in Italy. This is a fussy grape, very site specific and performs differently in different soils, at different altitudes and different exposures. It buds early and ripens late, requiring a long and warm growing season. It goes by different names in the various parts of Tuscany. Morellino in the area of Grosetto in the Maremma, Chianti in the areas all around Florence down to Siena, Prugnolo Gentile for Vino Nobile di Montepulciano and Sangiovese Grosso for Brunello. In Montalcino, in the southern part of Tuscany, it seems to achieve its highest expression and its perfect home. The trifecta of poor soils, constant breezes and sunny hot summers work their magic here. 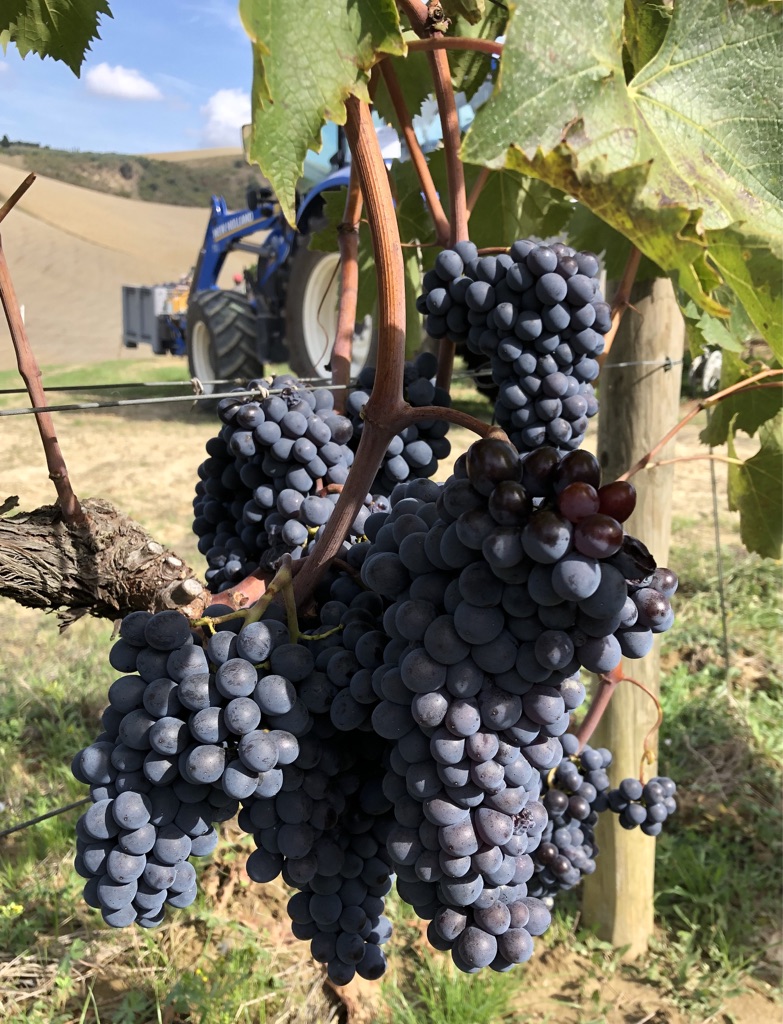